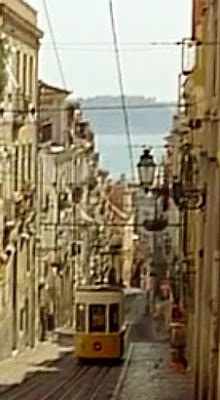 We are falling into rhythms in footprints, railroads, entangled wires. I can feel the erosions, their fortified twilights, gleaming, incandescent as your elusive excuses. There are deformations in store windows I want to be, traps, tones, gothic melancholies, weekends. There are lines of movie-theaters in these deformations, broken lines, thin, large, vague. We fit in the lines, like sprockets, reeled into dispositions conditioned for modest, breezy illusions. Glamour takes my heart, cuts it into saturations of success. I am falling into a mob of eyes, into their crowded gloss. The car-chase finds its eternity, the heart of its driver's engine. Streets integrate into a lost city, a generation of dreams. We are falling, turning into prayers still inventing unsuccessful amens, reviving depths in our closed eyes. The language of premonitions is as tasty as cold water, sinking, becoming sea. This certainty is baffling, alluring as green in tropical spaces.

This is our border, our bodies. If only song is not about building borders itself, lines, punctuations, notations, lyricism, the limit of octaves. If only I can dissolve further into ocean, down there inside, where notions of beginnings and endings circulate through the glassy charms in our eyes.

They're just moments, stagnant as mountains at night. Television is gift, language that enrich our extravagant modesties, whispering glamour that guide us out from illusions of endings, finite dialogs. Pass the remote, the options, starred with recoverable, plastic scars. If you look at the top of mountains in the tube, watch the movement of clouds, the lake below, waves of humanity, passing through the outlines of their silhouettes. It's bearable. We are immortal.

They're soft on skin, as day leaves the sun. The rush home takes it away. But it lingers, and disappears into night, into television shows, soft pillows. Something wakes you up later, around midnight. You realize your window is not closed, and the waves on the lake are calm as ever. Things do take care of themselves sometimes. The rain could fall as the sun rises.
Posted On: 5/19/2010 01:15:00 AM No comments:

In this movie, I've always wanted Bette Davis to play the conniving role of Eve, played by Anne Baxter. But mine is unrealistic fantasy, because Bette Davis is not young anymore when she was cast in this movie. Eve has to be someone younger, or who looks young enough to evoke dimensions of innocence and driven to achieve a dream. And too, the Eve character, here, needs a face that can look cold and composed, while suffering internal panic and hysteria. Baxter's face can assimilate to that character of face.

At first, Baxter's Eve has that small-town-girl quality about her, dwarfed by big dreams to be a star; but Baxter slowly peels out the that innocent little girl, to reveal a monster beneath nice, accommodating demeanor. And like many human beings who have added monstrosity as part of their humanity, Eve's monstrosity, here, has moral dimension, if one prefers to empathize with her dire conditions the script has, initially, set for her. Like the Eve from Genesis in the Bible, Anne Baxter's Eve, here, is also driven out of her home. That is the turning point of Eve Harrington's life; from then on, she develops resolve that evolves into brewing passion not to be defeat's victim, but rather its agent, ready for destruction of any sort, in the name of survival. However, her idea of survival is not the basic idea of being able to eat three meals a day. Hers is survival to replenish a bruised ego, to heal it; fame and success appears to be the potent remedies that can recover the equilibrium of that ego.

Eve's focus and determination to be a star is sometimes too calculated to be realistic. These calculations give her life, organizes it, giving it air. Eve fantasizes being the star that Margo Channing is, every-time Eve sees her on-stage. And Eve watches Margo's performances over and over again, with the obsession of a stalker. But what Eve lacks in these fantasies is the opportunity to enter the tight circle of theater community she wants to be part of. One night, she grabs an opportunity, and acts her way, with convincing believability, into one of the inner circles of that community, a circle where she befriends a playwright, director, producer, critic, and Margo Channing herself. Eve is able to penetrate into that circle through one of the film's weaker characters, the playwright's wife, Karen Richards played by Celeste Holm(the real-life mother of Ted Nelson, the one who coined the terms "hypertext" and "hypermedia" in a 1965 publication, around the time this film was about to be made).

I remember, at least twice, Karen's Radcliffe background is mentioned; and I resisted thinking the Harvard in her is no match to a small-town girl's mind. But of course that's not a fair assessment of Karen; her Ivy-league background is but an element of who Karen is. But it's tempting to view Karen as some sort of sidekick; she is a playwright's wife, a friend of Margo Channing, and, most unfortunately, a pawn for Eve's ambitions, especially the part where she conveys to her playwright-husband to make Eve Margo's understudy. In doing this, Karen gives Eve an opportunity, because Karen believes in Eve's talents and cannot sense anything suspicious about her. And yes, Karen seems the only one who has been had by Eve; but she is not alone in this, eventually. Karen, her husband playwright, and Margo's fiance have all been had by Eve, including Margo herself. However, in Margo's circle, it is Margo's maid or personal assistant - Birdie Coonan, played by Thelma Ritter - whose suspicions about Eve, from the start, will help Margo see Eve differently. But initially, Margo doubts what Birdie senses in Eve. Indeed, Joseph L. Mankiewicz's script needs Birdie, as someone who sees the world outside the glass box of theater life. Somewhat instrumental in making Margo understand what Eve is all about, Birdie appears to be the only one who sees the real in Eve. But Eve surpasses Birdie, in this context, because Eve not only sees the real, she is able to see beyond it, and bravely transforms it through power of will and madness. Eve has learned something from her hard life, and uses that to map her future, through the savage, cunning mind of ambition.

It moves, digs deep in the blood, because it must, and it doesn't care about skin-color, politics, religion, even love. It moves, because it is against death, physical death. It moves because there's no other way to be. But in that movement is bloodshed, violence, the revelation of time as human face.

I like the part when the voice talks about the map that tells where Henri had taken his pictures. That makes me think of Google Maps, Flickr, or other software that mechanize their engines, about how they grab pictures from anywhere in the internet and map them where they are taken or where its photographer is from.

“The art of photography is deliciously impure: its aesthetic triumphs and traditions are inescapably enmeshed in the messy world of work.” So writes Peter Galassi, curator of “Henri Cartier-Bresson: The Modern Century,” the Museum of Modern Art’s ambitious new exhibition devoted to the work of one of the most brilliant photographers of the twentieth century. On view through June 28, 2010, the exhibition presents Cartier-Bresson’s work in a daring way—his most iconic masterpieces share wall space with lesser-known photographs from throughout his career. In this audio slide show, the photographer Dominique Nabokov—whose own work appears regularly in The New York Review—talks about the exhibition and the ways in which Cartier-Bresson’s daily works reveal his genius. An additional photograph from the exhibition appears in the May 13 issue of The New York Review. 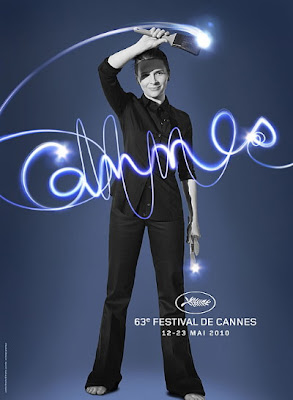 I love this poster, the light drawing, a brilliant idea, indeed. Film uses light to paint stories. And stories are supposed to illuminate, and give us light, the light of mystery, myth, desire.

Now Juliette Binoche's black outfit is interesting. I'd like to think this outfit represents a state of mourning, in the context of many things, the world's economic condition, the bombings, prices at the pump, and, speaking of pump, that environmental disaster down there at the gulf, the gulf of our earth-soul bleeding oil, indeed.

The most exciting to watch during festival opening day, are the video-documented Photocalls in the festival's website, wherein the director and cast of films selected in major prize categories pose for a mob of photographers. 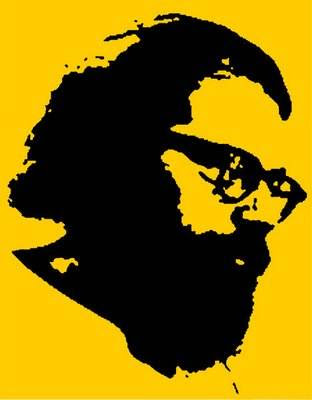 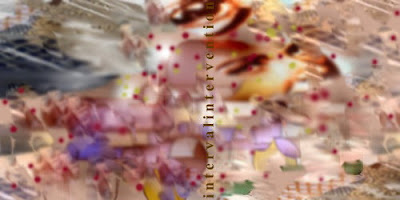 We sun freeways with glamorous alienation, peace in absences, meditative confusions. Superficiality is not transgression, but way of breathing, of publicizing soul. Smog warms movements from one sidewalk to another, increasing desire to refuel at a caffeine pump. There are expectations to patch, delusions to nurture, disillusions to clone. There is nothing to abolish, except cravings without passion, crosses, and calvaries.