Film-Talk: What Ever Happened to Baby Jane? 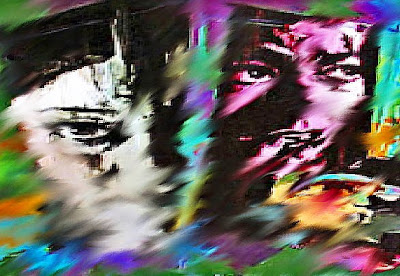 I've seen this movie a few years ago, and the story still works for me. Bette Davis, as Jane Hudson, gives multiple layers of horror, in this thriller. Jane is hyper-creepy, mean, ruthless, and, above all, abusive towards her crippled sister Blanche played by Joan Crawford. Crawford's Blanche makes us hate her for being too helpless; on the other hand, we feel her helplessness and want her to be cunning and courageous against her sister's wicked madness. But our desire to see this vengeful side of Blanche is a fantasy how we want the film to be. If the script had granted that desire, it would have been a predictable, weak movie, even unrealistic. Thus, the script has to make Blanche's character sweet lollipop for Jane's insanity and madness in the Hudson horror house. Indeed, Blanche is destined to be forgiving, and prone to rational tendencies, even though her sister cannot stand her. But this is logical for Blanche; she thinks of and feels for her sister, in the context of family. Blanche loves her sister, unconditionally.

The Hudson sisters live inseparable lives since childhood, through show business. After their mother's death, they live together. In the beginning, Jane is the child-star. But as adults, Blanche's acting career overshadows Jane's. Naturally, this is devastating to Jane. One night, they drive home together, from a party; Jane is the driver. At their home's driveway, Blanche opens the gate into the driveway. But while Blanche is doing this, Jane accelerates the car, to pin her sister to the gate. The incident cripples Blanche, makes her dependent on a wheelchair for the rest of her life, and Jane's constant presence to serve her daily meals. But that's just how the script makes us think how Blanche becomes a cripple. The script is brilliant, this way, because it set us up to advance our assumptions to conclusions that it is Jane who cripples Blanche; indeed, this is not the case. It's in the film's final sequence, in the seaside scene that we are informed the truth how Blanche is crippled. We hear this information from Blanche herself. On that beach now dying, Blanche reminds Jane that, on the night the car was smashed to their gate, Blanche herself drove the car into the gate, to hit Jane; Jane cannot remember this, because Jane was too drunk that night. But there is more: Blanche was able to get out of the car that night, that's why Jane is the one accused of driving the car into the gate, then left the scene. The crash snaps nerves in Blanche's spine, and thus cripples her.

On one significant level, the film comments about aging movie stars, specifically has-beens whose lives once occupied a niche in mainstream consciousness of popular culture, through entertainment gossip columns, and television news. Bette Davis' Jane gives us an image of a has-been gone twisted, one who harbors over-saturated longings and fantasies to feel the adulations from the glory-days of her stage and movie career. In contrast, Joan Crawford's Blanche looks level-headed to be mistaken as a has-been, even though she watches television re-runs of pictures she has starred in; in that light, she seems psychologically intact or have forgiven herself for attempting to murder her own sister. On the other hand, Jane's madness escalates; Jane serves Blanche a dead rat and bird on two occasions, ties her up for trying to call her doctor for help, and then murders their African-American house-maid, Elvira, after she sees Blanche's mouth taped and tied on her bed. Pure wickedness, you might say. Bette Davis' eyes are two hurricanes of horror in this film; they beat any studio-generated screams and colorful special effects - digital or otherwise - that try to make horror movies scary these days. Those eyes stare, not simply to scare, but to suck possible victims into its claws, taking them for wild spins, into roads accelerating insanities, to grind them as its newest proteges.© 2010 Michael Caylo-Baradi